With 91 goals scored in 2012 Lionel Messi set a record, that only Messi himself seems to be able to break. Being honored as FIFA's world player of the year for the 4th time in a row — of course this is a record too — was inevitable. Messi was elected by 170 coaches and 170 captains of national teams in the FIFA Member Association and a selected group of 165 journalists.

The Ballon d'Or 2012 visualization shows the network of votes cast to award the footballer of the year 2012. Voters and voted for players make up the 524 nodes of the graph. Node size is based on indegree. The 1513 edges are based on the given votes, with each of the voters having three votes: 1st place 5 points (thickest line), 2nd place 3 points, and 3rd place 1 point (thinnest line). Node color indicates either a captain (red), coach (violet), journalist (blue), or player who did not vote (green).

The voting data is retrieved from this PDF document — I can hardly imagine a worse format to publish data. The graph file was created with a Python script and preprocessed using the Gephi visualization platform to apply a Fruchterman-Reingold layout with some manual adjustments as well as node sizing and coloring. The interactive version is rendered with the JavaScript library sigma.js. 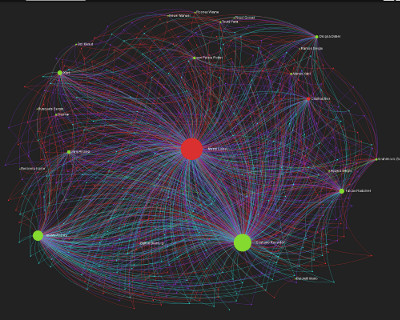