Deforestation takes place in many forms including wildfires, agricultural clearcutting and logging for timber. Based on estimates by the WWF forests cover 31% of the land area on Earth and annually 75,700 square kilometers (18.7 million acres) of forest is lost. Deforestation is a major source of carbon dioxide to the atmosphere and one of the main contributors to climate change.

This interactive map shows the forest area percentage of land area for most of the world's countries from 1990 to 2016. See the video below for an animation showing the changes through the years and check out the interactive version to explore the data in more detail.

The data comes from the Food and Agriculture Organization and is available from the World Bank website, where it is described as:

Statistical Concept and Methodology: Forest is determined both by the presence of trees and the absence of other predominant land uses. The trees should reach a minimum height of 5 meters in situ. Areas under reforestation that have not yet reached but are expected to reach a canopy cover of 10 percent and a tree height of 5 meters are included, as are temporarily unstocked areas, resulting from human intervention or natural causes, which are expected to regenerate. The Food and Agriculture Organization (FAO) provides detail information on forest cover, and adjusted estimates of forest cover. The survey uses a uniform definition of forest. Although FAO provides a breakdown of forest cover between natural forest and plantation for developing countries, forest data used to derive this indictor data does not reflect that breakdown. Total land area does not include inland water bodies such as major rivers and lakes. Variations from year to year may be due to updated or revised data rather than to change in area. The indicator is derived by dividing total area under forest of a country by country's total land area, and multiplying by 100. 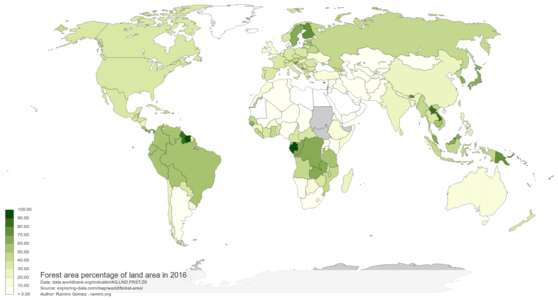