Where in the World Happen Most Murders

Intentional homicides are estimates of unlawful homicides purposely inflicted as a result of domestic disputes, interpersonal violence, violent conflicts over land resources, intergang violence over turf or control, and predatory violence and killing by armed groups. Intentional homicide does not include all intentional killing; the difference is usually in the organization of the killing. Individuals or small groups usually commit homicide, whereas killing in armed conflict is usually committed by fairly cohesive groups of up to several hundred members and is thus usually excluded.

The above definition explains what data is included in the Intentional Homicides dataset. The dataset ranges from 1995 to 2011 and currently is most comprehensive for 2008, which is shown by default.

The individual years can be selected from the top menu or the range of years can be played as an animation by clicking on Play Animation.

The visualization was created using map data from Natural Earth, the JavaScript library D3.js and the Chroma.js Color Scale Helper. 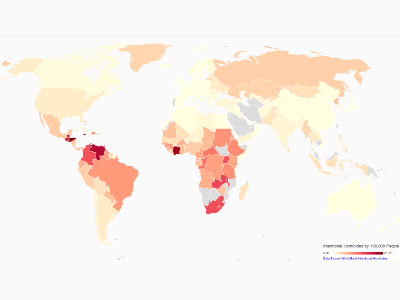